Motorcycles have a reputation for being fun, convenient, and less expensive to operate than a car. However, there are drawbacks to motorcycle riding as well. Motorcyclists are less visible to other drivers, and their lack of protection from the elements and external forces means they have a heightened risk of serious and potentially fatal injuries if they are involved in an accident.

If you have been injured in a motorcycle accident caused by the negligence or recklessness of someone else, you need an experienced motorcycle lawyer on your side.

According to national statistics provided by the Insurance Information Institute:

The Florida Department of Highway Safety and Motor Vehicles provides these statewide statistics: 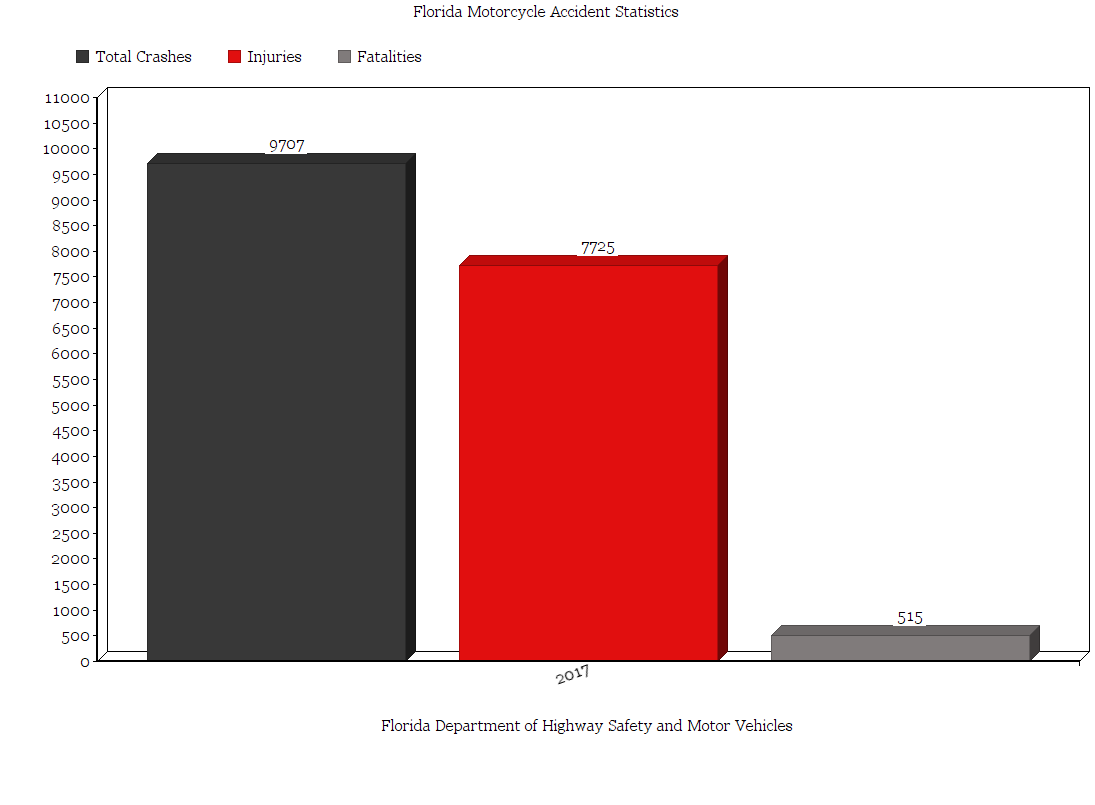 In Pinellas County, where Clearwater is located, motorcycle crashes and injuries are on the rise in recent years. Crashes have increased from 590 to 625 and injuries from 456 to 507 in a three-year period. Fatalities have hovered around 26 during that time.

How Do Motorcycle Accidents Happen?

While there are many factors that may lead to a motorcycle accident, some of the most common scenarios include:

Other common factors contributing to motorcycle accidents include:

Speeding by motorcyclists is especially risky because it gives riders less time to react to obstacles or hazards in the road, including other vehicles. Speeding by other drivers is also dangerous because motorcyclists have less opportunity to act defensively and avoid accidents.

Motorcycle riders do not have the benefit of the protections offered by other types of vehicles. The lack of airbags, seatbelts, the stability of four wheels, steel framing, and other physical barriers means motorcyclists are at high risk for serious and multiple injuries if an accident occurs. In fact, NHTSA reports 80 percent of all motorcycle crashes involve injuries to or the death of the motorcycle rider.

Some of the common injuries caused by motorcycle accidents include:

Florida Motorcycle Accidents in the News

The TCPalm reported a motorcyclist was killed in Port St. Lucie after a crash with an SUV in January 2019. The SUV was making a left-hand turn when the motorcycle rider attempted to pass a vehicle behind the SUV. The motorcycle struck the SUV, ejecting the rider, who died of severe head trauma at the scene.

In December 2018 the Bradenton Herald reported a motorcycle accident shut down I-75 during morning traffic. In that case, a motorcyclist traveling down the interstate braked for no apparent reason, causing the motorcycle to turn over on its right side. It then continued sliding northbound. The driver fell off of the motorcycle and was struck by a car. He was then struck by three more vehicles. He died at the scene.

WFLA News Channel 8 reported a Clearwater accident that occurred in October 2018 and resulted in critical injuries for the motorcyclist. A 27-year-old rider from Lakeland had a green light when he approached the intersection. A 66-year-old motorist was making a left-hand turn at the intersection when she collided with the motorcycle. The motorcycle rider’s injuries were described as “life-threatening” and he was flown to a hospital in St. Petersburg. WFTS ABC Action News reported the Clearwater accident prompted the Florida Department of Transportation to change the blinking yellow yield arrow at that intersection to a red or green arrow during rush hour. The flashing yellow arrow had been a source of concern for many motorists using the intersection because of poor visibility of all lanes of oncoming traffic when making a turn. Since the accident, the flashing yellow arrow is only in use during overnight hours when there is less traffic.

If you have been involved in a motorcycle accident, regardless of the facts, you may have to negotiate with one or more insurance companies. If the insurance company fails to offer a fair settlement for all damages, you may file a personal injury claim against all parties who caused or contributed the accident by their negligence or recklessness. Speak to an experienced motorcycle lawyer as soon as possible if you need to file a personal injury claim.

There are several important Florida laws that may impact personal injury claims generally and motorcycle accidents specifically, including:

If you have been injured in a motorcycle accident caused by the negligence or recklessness of another motorist, or by a defective motorcycle or part, you may be feeling overwhelmed. Being in an accident may have serious physical, emotional, and financial consequences, and you should not have to deal with insurance companies and the other parties alone. Speak to an experienced motorcycle lawyer as soon as possible. It is an attorney’s job to represent their clients in negotiations, achieve fair settlements, and advocate for their client’s rights if litigation becomes necessary. Getting justice, whether through a settlement or a verdict and award of damages, may take months or even years. Don’t wait to get help for your case.

The experienced personal injury attorneys at Sibley Dolman Gipe Accident Injury Lawyers, PA pride themselves on providing big law firm results with the personal attention of a small firm. We analyze the facts of every case, identify all potential claims, and use every available to tool to calculate accurate damages, both already incurred and anticipated.

While past results are no guarantee of future outcomes, some of the settlements and awards we have secured for our clients include:

Motorcyclists are at greater risk for physical injuries and related financial losses than other types of motorists who have been involved in an accident.The Clearwater motorcycle accident lawyers at Sibley Dolman Gipe Accident Injury Lawyers, PA are committed to providing professional representation and advocacy for the injured motorcyclists. Contact us today at (727) 451-6900 or online to schedule your free consultation and learn if we may be able to help you.