Representing Victims Who Were Injured or Killed at Astroworld Music Festival

Sibley Dolman Gipe is currently seeking individuals or their families who were injured while attending the Travis Scott concert at the Astroworld Music Festival. We are ready to hold all the parties who were responsible for the injuries and deaths accountable for their negligence.

The Astroworld concert organizers, promoters, security, venue, and performers all have a duty to keep concertgoers safe. When they fail to hold up their end of the bargain, and lives are lost or damaged, they deserve to be held accountable.

If you were injured at the Astroworld Travis Scott concert, the attorneys at Sibley Dolman Gipe are ready to help right now. Call 727-451-6900 today to discuss your case.

What Happened at the Astroworld Travis Scott Concert? At least eight people are dead and dozens more are injured after a Travis Scott concert went off the rails on November 5, 2021. The crowd of over 50,000 concertgoers surged during the performance, resulting in one of the deadliest concerts in U.S. history.

The event, which was recorded and posted to thousands of social media account almost immediately, was clearly a result of poor planning, lack of resources, and complete disregard for the fans’ safety.

Signs of danger and neglect started earlier in the day when thousands of fans without tickets jumped the security booth and ran into the venue. This event should have been cause for concern since these attendees were not checked for weapons, did not follow Covid guidelines, and clearly didn’t have respect for the rules.

As Scott’s performance started shortly after 9 p.m., the chaotic crowd ramped it up and began surging forward. Almost immediately, fans became unable to breathe, move, or escape. Their panic can be seen in TikTok, Twitter, and Instagram videos.

This asphyxiation and trampling are primarily what caused moth of the deaths and injuries.

Seventeen people were taken to the hospital, 11 of which were in cardiac arrest. Eight are confirmed dead. And one 10 year old is in a coma.

Day 2 of the festival was canceled as officials investigate.

What Caused The Astroworld Tragedy? The exact cause of the AstroWorld tragedy isn’t known yet but some observations can be made. To start with hundreds or thousands of fans broke into the venue earlier in the afternoon. It’s could have caused the then you to go over occupancy which is one possible reason for the overcrowding.

The second contributing factor or the way the barriers were constructed. Barriers were erected to separate the VIP section from the general admission section with a small walkway down the middle. This allowed Spectators to get pushed up against the wall of barriers with nowhere to go.

Another factor is the amount of security and medical staff that was on hand. Whether or not it was enough to handle the number of people and the level of activity is yet to be determined.

Finally, another contributing factor in the extent of this tragedy is whether or not it could have been prevented by stopping the concert. It is now known that Travis Scott continue to perform for almost 40 minutes after the incident was declared a “mass casualty event” by officials.

Timeline of Events at Astroworld

2:00 PM – Hundreds of fans surged at the festival’s perimeter in an attempt to get in, knocking over fences and bypassing security.

8:15 PM – Medical staff is overwhelmed and begins to only treat the worst injuries. At this point, some victims have been unconscious for more than 20 minutes.

8:16 PM – Countdown timer announcing Travis Scott’s arrival continues to run down and reset itself, further hyping up the crowd.

8:39 PM – Signs of overcrowding are present and people are already fighting to get out, according to a video.

9:06 PM – Travis Scott begins to perform, resulting in people pushing toward the stage and leading to a crushing event.

9:15 PM – The crowd continues to compress. people begin to fall and some are injured, additional panic ensued. One witness reports that security guards reinforce crowd control barricades by tying the supporting bars together as they began to buckle under the weight of the crowd.

9:23 PM – Some fans begin climbing scaffolding and barriers to escape the crush.

9:24 PM – Fans can be heard screaming for help and chanting to stop the show. Scott plays on.

9:44 PM – A concertgoer tells concert personnel that people are dying. They are ignored.

How Did Security and Travis Scott Respond? Travis Scott continue to perform for nearly 40 minutes after Houston officials had officially declared the incident a mass casualty event.

Security and medics in the crowd try to pull people to safety but the overwhelming crushing effect of the crowd prevented them from pulling most people out.

Some videos show medical staff trying to get to passed out or unconscious people and are unable to move through the crowd in any meaningful way.

Scott has been blamed by some for continuing to perform even though so many people were in danger or injured. He later claimed in a video that he did not know anything was wrong but hundreds of videos clearly contradict this since he is in close proximity to the crowd as they chant to stop the show. In other videos, Scott is just feet away while fans are clearly in distress.

This is also not the first time that Travis Scott has been accused of endangering his fans. In April 2017, Scott encouraged a fan at a show in New York City to jump from a balcony into the crowd, causing him to become paralyzed. A month later, he was arrested after a show in Arkansas on suspicion of inciting a riot.

Who Can Be Held Responsible for Astroworld Injuries and  Deaths?

In cases like Astroworld where there is clear negligence, any person or party who was responsible for the event can be held liable for any injuries or deaths.

This is true for Travis Scott, and possibly special guest Drake, who continued to perform despite clear signs of trouble from the crowd and staff.

Why Do People Get Injured at Concerts?

Concert injuries and deaths are rare. That’s because they are preventable with proper security, planning, and oversight. In the case of Astroworld, with 8 dead and hundreds injured, it’s clear that negligence was involved.

Concert injuries are more common at events that involve:

When these conditions are present, fans can be seriously injured or killed like they were at the Astroworld Music Festival.

Concerts are inherently dangerous places. When you pack a large number of young people into a crowd—and add drugs and alcohol—there is room for injuries. However, what happened at Astroworld is clearly a sign that something more was going on.

Here are the most common causes of concert injuries.

Can Travis Scott Be Held Responsible for the Deaths or Injuries? 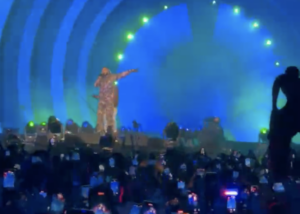 Performers themselves may be partially or wholly to blame for concert-related injuries, especially if they encourage reckless behavior or fail to stop an out-of-control concert.

Performers—especially those who are headlining or created the event—have a lot of control over what happens. They can stop a show at any time, for any reason. That is what should have happened here.

Is there a catch to the Astroworld ticket refund?

On November 8, 2021, one of the concert promoters, Scoremore, released a statement on Twitter saying there will be full refunds. No additional details have been released and it’s not clear how someone would apply for a refund. It is also possible that these refunds may include a release of liability which prevents someone who takes the refund from filing a lawsuit for injuries or death.

We will update this article once we know more about this subject.

Sibley Dolman Gipe is currently seeking individuals and families who were injured or lost a loved one during the Astroworld Festival in Houston, Texas.

If you or a loved one were injured at the Astroworld music festival, you may be entitled to financial compensation for your damages.

We are pursuing lawsuits against Astroworld, Travis Scott, Live Nation, NRG Stadium, and any other responsible parties for the preventable tragedy that unfolded at Astroworld.