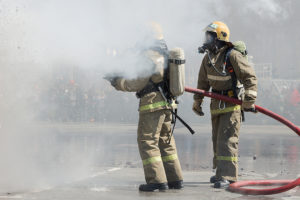 Were you diagnosed with cancer after being exposed to firefighting foam?

Aqueous Film-Forming Foam (AFFF), also known as firefighting foam, is used to extinguish liquid-based fires like those caused by gas or jet fuel. While life-saving in many ways, it is potentially dangerous to humans. AFFF is used solely for the purpose of fire suppression. These chemicals in fire fighting foam may increase the risk of certain types of cancer or cause other non-cancer issues like birth defects, obesity, and diabetes. Firefighters, military members, airport personnel, and those who work in the oil or gas industry may be particularly at risk of AFFF-caused cancer.

If you have been diagnosed with cancer after being repeatedly exposed to firefighting foam, you should contact a Firefighting Foam Cancer Attorney to see if you can receive compensation for:

The known health risks associated with AFFF is simply too great to ignore. The AFFF foam cancer lawsuit is presently subject to multidistrict litigation and all lawsuits throughout the United States are pending in Federal Court in South Carolina before Judge Richard Gergel. In other words, if you file an AFFF foam lawsuit your case will be consolidated in one single Federal Court in South Carolina with Judge Gergel presiding.

The Centers for Disease Control and Prevention (CDC) has long warned of the link between AFFF and cancer. In fact, the CDC is presently studying firefighting foam and the contamination of drinking water.

Dolman Law Group has a long and successful history of fighting for the injured and we can help you too. There is no fee unless we recover money for your case. Contact us today for a free consultation regarding your firefighting foam cancer lawsuit.

Our Firefighting Foam Cancer Attorneys Fight For You

At Dolman Law Group, we always put our clients first and it shows. Although we are one of the largest law firms in the community, our clients get personalized attention and legal guidance from the moment they step into our office. We know the harm dangerous products can cause and we fight aggressively to ensure that our clients receive the help and compensation they need to rebuild their lives.

Firefighting foam is dangerous and responsible for numerous cancers, medical disorders, and illnesses. We believe that those who suffer injury deserve a legal team on their side who can hold negligent manufacturers and companies accountable for the harm their products caused.

If you or a loved one has been exposed to firefighting foam and later developed cancer, such as kidney, testicular, or pancreatic cancer, we can help. Our law firm is currently seeking to represent injured firefighters and families affected by firefighter foam in the multidistrict litigation pending. We will listen to your story and help you understand more about the legal rights available to you during this time.

The greatest risk for cancer caused by firefighting foam is to those who have been exposed for a long period of time, especially without understanding the risk. This often applies to firefighters, military personnel, airport employees, and other workers exposed to AFFF throughout their careers.

What Is Firefighting Foam?

Firefighting foam has been around and used frequently since the 1950s. It currently comes in different varieties depending on the type of fire that must be extinguished. AFFF is the preferred fire suppression method for flammable liquid fires. Firefighting foam is dispensed through hoses by a firefighting team to cool the fire and to coat whatever is fueling the fire in order to prevent it from receiving further oxygen. The specific type of foam that carries a risk of causing cancer is per- and polyfluoroalkyl substances (PFAS) which are made up of man-made chemical compounds. PFAS are also found in consumer products like nonstick pans, polishes, waterproofing sprays, paints, and cleaning products.

There is no denying that fire fighting foams play an important role in extinguishing fires but that also doesn’t excuse those who have had a hand in making workers sick and potentially causing AFFF foam cancer fatalities. The risk of cancer from AFFF exposure should be well-represented and known to those who are exposed to it so that they can make an educated choice and take proper precautions.

There are many occupations that increase the risk of exposure to firefighting foam and its deadly chemicals. Some of those include:

Keep in mind that individuals residing in properties within very close proximity to a fire department, airport, or military base may have been exposed as a result of water runoff. AFFF can contaminate a water supply.

Does Firefighting Foam Cause Cancer?

AFFF contains known carcinogens which are chemicals that increase the risk of people developing cancer or other related diseases. The specific PFAS that are known to be carcinogenic are Perfluorooctane Sulfonate (PFOS) and Perfluorooctanoic Acid (PFOA) which are both found in firefighting foam.

When a person is exposed to PFAS routinely, their body absorbs the chemicals and they build up over time. In fact, PFAS are known as the “the forever chemical” because of their long half-lives and their inability to break down. As the carcinogens accumulate inside the body, they increase a person’s risk of certain cancers and illnesses, like:

For decades, studies have shown that exposure to PFAS can cause cancer. However, despite the risk; manufacturers withheld information and warnings. As a result, firefighters and other workers have been exposed to AFFF for years and years without understanding the potential risks. 1960s: AFFF began being commercially used in the 1960s by firefighters and at military bases to fight extremely hard to extinguish fires. By the end of the decade, studies began to find that exposure to PFAS chemicals could cause health issues in laboratory animals, including in their testicles, liver, adrenal glands, and other organs.

1970s: By the end of the 1970s, additional research studies were finding that the specific nature of PFAS meant that it could potentially stay in the blood of animals and humans for a long period of time. Despite these studies, manufacturers continued to market and sell firefighting foam without adequate warnings and precautions, and employers continued to allow its use.

1980s: In the 1980s, the Air Force conducted animal studies that revealed the dangers to both the environment, as well as health of individuals exposed to firefighting foam. In 1985, the Navy cited the toxic effects of AFFF in an internal report. In 1989, the Air Force even called for the better management of AFFF wast due to its toxic effects. Over the next 40 years, research continued to reveal exactly how PFAS in firefighting foam harmed humans and caused cancer, yet it was still allowed to be used.

1990s: In the 1990s, the Army believed AFFF to be so dangerous and toxic that they urged Fort Carson to stop using it. This same decade, Dupont, one of the manufacturers, was aware that its AFFF product, known as C8 caused testicular, pancreatic, and liver cancer in lab animals. However, they failed to notify and inform the EPA of this finding.

Early 2000s: In the early 2000s, additional research and testing found multiple side effects among firefighters and other workers exposed to PFAS. These studies revealed that exposure to firefighting foam increased the likelihood of cancer, changed human hormones, and impacted the thyroid and liver. It was also discovered that exposure to PFAS and PFOA was probably linked to incidents of kidney cancer, testicular cancer, and other types of cancer.

Recently, long term exposure consequences have started to show their terrible repercussions. Retired firefighters and others who have spent a long time in an industry exposed to AFFF have begun to develop cancers or realize what caused their cancer. Today, thanks to science and other successful lawsuits, it is possible to hold those accountable for AFFF-caused cancer.

Firefighters Are Most At-Risk of Cancer from Firefighting Foam

Because firefighters are exposed to firefighting foam most often, they also face the highest risk of getting cancer caused by AFFF.

Multiple studies have found that firefighters have an elevated level of PFAS in their blood when compared to the normal population. In an article published by the Journal of Occupational and Environmental Medicine, the levels of PFAS in firefighters were found to be up to 3 times higher than that of the non-firefighter population.

Since PFAS do not leave the body easily, they commonly continue to build up as exposure to the chemical persists. One Australian study actually found that the amount of the carcinogen in a firefighter’s blood was directly correlated to the number of years on the job.

PFAS and PFOA Has a History of Cancer Risk

The U.S. Environmental Protection Agency (EPA), other government agencies, the military, and manufacturers of the chemical are well-aware of the dangers of PFAS, including those found in firefighting foam. Because of this, the EPA has stopped certain versions of the chemical from being manufactured in the US. Additionally, the EPA’s PFOA Stewardship Program serves to eliminate these chemicals from emissions and products. This clearly shows that they know they are dangerous.

Who is Liable for Firefighting Foam Cancer?

According to allegations presented in past and existing firefighting foam lawsuits, manufacturers are accused of:

Were You Diagnosed with Cancer After Firefighting Foam Exposure?

If you have been diagnosed with cancer and you are a firefighter, current or former member of the military, or any other type of worker who has spent years working with AFFF, you should speak to an experienced AFFF lawyer to discuss your rights and options. You may be eligible to file an AFFF cancer lawsuit. Our law firm will investigate your claim and exposure to this known carcinogen that poses a substantial risk to human health.

Dolman Law Group prides itself on holding negligent and irresponsible businesses liable for creating and promoting dangers to unsuspecting victims. For a free consultation regarding your eligibility to file a firefighting foam cancer lawsuit, call us at (727) 451-6900 or contact us online.