Women who served or lived at Camp Lejeune between 1953 and 1987 and later suffered miscarriages, and men and women who were later deemed infertile, could have the right to file a lawsuit and recover damages.

Contaminated water in the wells at Camp Lejeune may have caused infertility, miscarriages, illnesses, and diseases in over one million service members and their families. Civilian contractors who lived on the base were also included in this group. 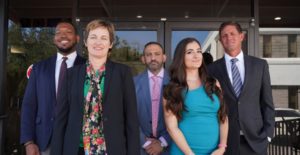 New laws allow those affected by the contaminated water at Camp Lejeune to sue the government. This is the only instance where injured people can sue the government over chemicals and other injuries in the military or on a military base. Usually, you would have to go through the Veterans Affairs (VA) disability claims process.

However, service members were not the only people affected by the contaminated wells. Family members and contractors may have also been affected.

If you are a service member, you might qualify for medical expense coverage and, for certain illnesses and diseases, disability compensation through the VA. Filing a lawsuit for injuries sustained from the contaminated water does not interfere with your disability claim.

A Camp Lejeune water contamination attorney can help you determine whether you are eligible to file the lawsuit and if so, will help you file and recover the compensation you deserve.

In 2012, Congress passed the Caring for Camp Lejeune Families Act of 2012. The act allowed veterans to receive health care from the VA if they served on active duty from Aug. 1, 1953, through Dec. 31, 1987. The 2012 Act allowed veterans to receive free health care for certain illnesses and diseases that may have been related to the contaminated water at Camp Lejeune.

Additionally, the VA created a list of presumptive illnesses for veterans, National Guard members, and reservists who lived on the base during those years. The presumptive list, which allows veterans to apply for disability benefits, did not include all of the diseases, illnesses, and conditions listed in the 2012 Act.

Veterans could claim disability for:

In 2022, Congress passed legislation that allows those possibly affected by the contaminated water at Camp Lejeune to file a lawsuit. Usually, those injured in such a manner cannot bring a lawsuit—they can only recover compensation through the VA’s disability program.

The Camp Lejeune Justice Act (CLJA) allows for the recovery of attorney’s fees, medical expenses, loss of companionship and/or consortium, loss of quality of life, and other damages. It does not allow veterans and their families to recover punitive damages.

The CLJA also gives a filing deadline—you have just two years from the date of enactment of the CLJA to file your lawsuit with the Navy JAG office. The process is complex as you must exhaust all administrative options before filing the lawsuit.

A Camp Lejeune water contamination lawyer can help you file a claim and the lawsuit and works to ensure everything is on time and you get the compensation you deserve.

Chemicals in the Wells at Camp Lejeune

Studies have shown that some of these chemicals also cause miscarriages and infertility. This colorless, volatile liquid is non-flammable and smells sweet. It evaporates quickly into the air. Trichloroethylene is used to remove grease from metal parts. Manufacturers also use this chemical in the composition of other chemicals, including HFC-134a, the refrigerant used in most vehicles for air conditioning.

If trichloroethylene is in the water or soil, it breaks down very slowly. It stays in groundwater for a long time. Exposure methods include breathing it in and drinking it in contaminated water. Mild exposure could cause dizziness, headaches, and sleepiness.

Large amounts could cause you to go into a coma or die. Exposure causes:

This chemical is non-flammable and colorless. It also goes by PCE, perc, perchloroethylene, and perchlor. It is often used to degrease metal parts and as a dry cleaning agent.

If you breathe high levels of this chemical, you could suffer dizziness, develop headaches, incoordination, become drowsy, or lose consciousness. In high enough concentrations, it could kill you.

The chemical causes issues with your liver, kidneys, and brain chemistry.

Another colorless gas, vinyl chloride, also smells sweet. It does not occur in nature but forms when trichloroethane and tetrachloroethylene break down. Manufacturers use the same chemical to make PVC (polyvinyl chloride), which they then use to make pipes, wire coatings, packaging materials, and other plastic products.

Vinyl chloride evaporates quickly if it is in soil or water, as long as it is near the surface. It can dissolve in water, though not in large amounts. Exposure happens when you drink water from contaminated wells.

This chemical causes sleepiness and dizziness. It also affects the liver, causes immune reactions, nerve damage, and blood flow in your hands, and, if you spill it on your skin, it could cause numbness, blisters, and/or redness. It can also damage the testes and sperm.

Another colorless liquid, benzene, also has a sweet smell. It will dissolve a bit in water and quickly evaporates in the air. This one is flammable, unlike the other three chemicals found in the Camp Lejeune wells. Many manufacturers use benzene in their processes, including those that make detergents, lubricants, pesticides, dyes, certain plastics, nylon, and more. Benzene occurs naturally in gas, crude oil, and cigarette smoke.

Higher Rates of Miscarriage and Infertility

Researchers have also learned through studies that there is a strong link between the Camp Lejeune water contamination and infertility, miscarriages, and children born with congenital disabilities.

Suppose you suffered a higher incidence of miscarriages or found it difficult to get pregnant, and you lived at Camp Lejeune for at least 30 days. In that case, a Camp Lejeune water contamination lawyer could help you file a claim and/or lawsuit and recover the compensation you deserve.

If you worked or lived at Camp Lejeune from the mid-1950s through the mid-1980s and suffered miscarriages or had fertility issues, you could file a miscarriage and fertility lawsuit. You could also have other health issues related to your time on the base.

The law passed in 2022 allows veterans, contractors, and their families to file a lawsuit against the government for miscarriages, infertility, and other issues.

You must prove that the Camp Lejeune water contamination affects your health. You have a very short time to go through the administrative process and file a lawsuit to recover compensation for your injuries, including miscarriages, infertility, and the death of a loved one.

You will also need to show medical records regarding all miscarriages and fertility issues. Collect those medical records if you have other conditions that might be related to the Camp Lejeune water contamination.

Additionally, you will need:

You must exhaust the administrative actions first. A Camp Lejeune water contamination lawyer will help you through the process, including filing the administrative claim. The claim process is complex as you must file evidence showing you lived at Camp Lejeune and prove you had one of the allowed illnesses, diseases, or conditions.

Once you have everything together, your contaminated water lawyer will help file the claim to ensure it is correct and goes through the process correctly. Regardless of where you live, you must file your claim with the Office of the Judge Advocate General of the Navy’s Tort Claims Unit in Norfolk, VA.

If you previously filed under the Tort Claims Act and the claim processing center denied it, you could refile your claim for consideration.

Filing a Claim With the Veterans Affairs

You could also file a claim with the VA, but you will only get disability for certain illnesses and diseases the VA has determined service-connected. Filing a VA claim is also complex. You will need the same documentation required to file a lawsuit.

Since the VA pays disability only for illnesses you currently have, you cannot receive disability for a miscarriage.

The Benefits of Filing a Camp Lejeune Water Contamination Lawsuit

Because the VA does not pay disability for miscarriages, infertility, or the death of a loved one, the ability to file a lawsuit allows you to recover compensation for these conditions and the death of a loved one. The VA also does not pay disability payments if you had lung cancer or another cancer or condition caused by Camp Lejeune contaminated water and recovered.

However, if you had one of the conditions in the past, you can still file a claim. If you currently have one of these conditions, you might receive compensation for past and current medical expenses. Thus, you must locate all receipts and other documentation for your condition. Even if you suffered several miscarriages years ago, you could recover compensation for them.