Road Defects Can Cause Serious Injuries to Bicyclists 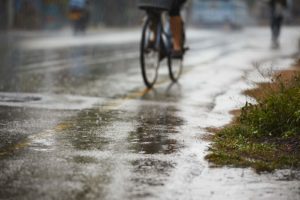 Cyclists face a variety of dangers on the road–the most severe of them being strikes by automobiles. Because bicycles offer much less protection than passenger automobiles, riders are particularly prone to injury and even death from collisions with vehicles. This relative lack of safety also makes the roads themselves more dangerous for cyclists. Obstacles that are a mere annoyance for passenger vehicles–like potholes and railroad track crossings–can cause severe damage to a bicycle and injury to the cyclist if they are not handled properly. In this post, we will go over some of the most common road-related dangers for bicyclists and offer a few tips on how to avoid them.

Potholes are among the most dangerous road condition hazards for cyclists because they are incredibly common and almost impossible to completely remove. Like the Hydra from Greek mythology, as soon as one pothole is filled, others tend to pop up out of nowhere, seemingly overnight. Riding into a pothole can cause a number of problems for cyclists, from puncturing a tire on the mild end of the spectrum to throwing the rider from the bike into moving traffic on the severe end. Landing face first on a paved surface can cause bruises and broken bones while being hit by a moving vehicle can be deadly. The most effective way for dealing with potholes is to avoid them by riding around them, but that is not always an option, especially on busy urban roads. If you cannot swerve to avoid a pothole, you should use the “bunny hop“1 maneuver to jump over it. Here’s how it works:

Of course, jumping over potholes like this takes practice. Be sure you master the technique in an empty parking lot first before trying it out on the open road.

Painted Lines: Painted roadways can be slick,2 especially in wide markings like pedestrian crossings. This is because the paint fills in the asphalt’s texture, which reduces the amount of grip your tires have on the road, especially when the paint is wet. When approaching pedestrian crossings and other painted markers, be sure to slow down and allow yourself more time to brake.

Wet metal: Metal surfaces in the road (like manhole covers and steel plates) are as slick as ice when they are wet. When approaching wet metal, cross with your bike absolutely upright, as even a slight tilt can cause your wheels to slip and throw you from the bike.

Sewer grates: Like manhole covers and steel plates, sewer grates are also made of metal and can be slippery, especially when wet. However, sewer grates present another problem for cyclists: They have long, rectangular holes in them that can easily swallow a bicycle tire, sending the rider headlong over the handlebars. Avoid sewer grates by not riding so far into the gutter that they become obstacles.

Leaves: Biking through leaves is a hazard that is most severe during the fall, as large piles of leaves can quickly cover the sides of a road. While dry leaves can reduce the amount of friction between your bike’s tires and the road, especially if they are newly-fallen, this problem is exacerbated if the leaves are even the slightest bit wet. As with biking on all other slick surfaces, slow down and try to ride straight through the leaves, as any tilt can cause your bike to slip out from under you.

Uneven surfaces like speed bumps, cobblestones, bricks, and gravel are treacherous to cyclists because they are unpredictable. Unlike on smooth asphalt roads, the cyclist on uneven surfaces has no idea what type of terrain is coming up next. The best technique for avoiding accidents while driving over rough and uneven surfaces is to rise up out of the seat slightly so that your center of gravity is still low, and use your arms and legs as shock absorbers. This way, your body will move fluidly while the bike moves up and down. If you regularly ride on rough surfaces, you might also want to consider investing in wider tires.

Most Common Types of Cyclist Injuries

If you have been injured in a bicycle accident, please contact the attorneys at the Sibley Dolman Gipe Accident Injury Lawyers, PA for a free consultation by calling 727-451-6900 or by sending us an email through our online contact form.