What Are the Causes and Effects of Florida Bicycle Accidents? 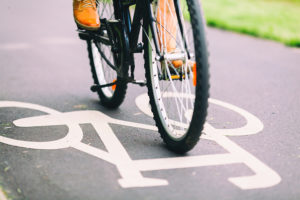 Bicycle accident injuries in Florida happen with great frequency. There are several factors that put Florida in the top five states in the number of bike crashes. Florida is a year-round bicycle riding state. The state contains a vast network of bike trails and 825 miles of sandy coastline making it a bike rider’s mecca. In addition, a large amount of Floridians rely on their bicycles as a primary means of transportation to and from work. These people often ride after dark and bicycles typically do not have the illumination levels of motorcycles. Contrary to many beliefs most bicycle accidents are not caused by the carelessness of the riders but by motor vehicles that fail to yield at crossings or drive too close to, or in, a bike lane on a roadway. Distracted drivers account for a large percentage of crashes.

Florida bicyclists have a broader age range than other vehicle operators. They range from pre-school toddlers with training wheels to adults of all ages. All riders in Florida under the age of 16 are required to wear helmets when riding, although it is highly recommended for all riders. A bike rider of any age, under Florida law, is considered a motorist and is subject to the same rules of the road as other drivers. They must obey signs and speed limits like any other driver. One difference is that they have designated bike lanes on many main roads that they are required to ride in, unless an obstruction or hazardous road condition exists.

Beaches, of course, are very safe places to ride and designated bike trails should be as well. That is not always the case. Many Florida bike trails intersect main roads and this is often the scene of crashes when a motorist fails to obey a yield or stop sign. These, like any crash involving a bicycle and a car, are almost always serious. This was apparent in a recent hit and run in Pinellas County, along the Pinellas Trail. The cyclist was not only seriously injured, but the driver stole his bike and fled, leaving the injured man on the ground alone. Three months earlier, in April of this year, a 59 year old man, was struck and killed while riding along the same trail.

Another growing cause of injuries to bicycle riders, in urban areas of the state, is referred to as “dooring.” This occurs when a parked car door is suddenly opened into the path of a bicycle that is passing the car. This happens due to the low sound and visibility of the bike, and the inattention of the exiting passenger. Bicyclists need to be wary of parked vehicles that they are passing but the fault for many dooring accidents usually falls with the car owner since they are expected to keep bicycle lanes clear and are expected to

Injuries from bicycle crashes are almost always serious enough to require hospitalization. Some typical injuries are:

Many cyclists who were injured in an accident involving a motor vehicle have the misconception that the injuries they received were their own fault for riding without a helmet. That is entirely untrue. Florida Law states that “Failure of a person to wear a bicycle helmet may not be considered evidence of negligence or contributory negligence.”

A driver who injures, or even kills, a bicycle rider only faces a $1000 fine and possible court costs in the State of Florida, unless there was a DUI involved. However, the bicycle rider can sue the responsible party for medical bills, lost wages, diminished future income, pain and suffering. In many cases, the driver may have been distracted and did not see the cyclist or failed to yield. Or the driver may have been under the influence of alcohol or drugs. There may have been a failure to maintain the roadway or a lack of warning signs or signals.

In cases involving a cyclist injured in a crash, retaining a skilled bicycle accident injury attorney is imperative. The attorney has the experience and resources to thoroughly investigate and reconstruct the accident to determine who was really at fault and why. If you or a loved one has been injured in a bicycle accident call the accident attorneys at Dolman Law today. Sibley Dolman Gipe Accident Injury Lawyers, PA is the team that has the tenacity and skills to win the maximum cash award that you deserve. Free consultation and evaluation are available. Be sure to act quickly as lost time can quickly cloud the facts of your case. To contact Sibley Dolman Gipe about your case either fill out a contact form online or call our office at 727-451-6900.